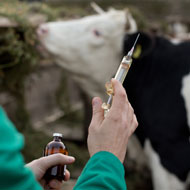 As many as 100,000 cattle would be needed to show the effect of a vaccine on bTB transmission.

New research has highlighted the cost and scale of field trials for bovine TB (bTB).

Writing in the journal eLife, researchers show that as many as 100,000 cattle would be needed to show the effect of a vaccine on bTB transmission. They suggest that this scale and cost could be dramatically reduced by using smaller, less expensive experiments.

“We already know that the BCG vaccine has the potential to protect cattle from bovine TB infection,” explains first author Dr Andrew Conlan from the University of Cambridge’s department of veterinary medicine. “Our results highlight the enormous scale of trials that would be necessary to evaluate BCG alongside continuing testing in the field.

“Such trials would be hugely expensive, and it isn’t even clear whether enough farms could be recruited.”

The researchers propose a natural transmission experiment that involves housing a mixture of vaccinated and unvaccinated cattle with a number of infected cattle. They argue that such an experiment could show the efficacy of vaccination, using as little as 200 cattle.

In the UK, the bTB strategy is to ‘test and slaughter’ infected animals. Whilst the BCG vaccine does exist, it can cause some cattle to test positive falsely.

The BCG vaccine is currently banned in Europe. However, the European Union has stated that it would consider relaxing its laws if the UK government could show that a vaccine is effective on farms.

“If we could consider replacing test-and-slaughter with vaccination, then the economics becomes much more attractive particularly in lower income countries,” explained professor James Wood, head of Cambridge’s department of veterinary medicine.

“Then we would no longer need to carry out expensive testing, but could instead rely on passive surveillance through the slaughterhouses.”