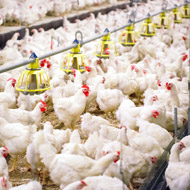 The first DNA-edited chicks will be hatched at the Roslin Institute later this year.

Poultry to act as a ‘buffer between wild birds and humans.’

Researchers at Imperial College London are investigating if there is a way to prevent avian influenza virus crossing into farmed animals from wild birds.

Working with The Roslin Institute, the scientists are using CRISPR gene-editing technology to create chickens that are resistant to infection by influenza.

Study leader Professor Wendy Barclay believes that by preventing influenza virus crossing from wild birds into chickens, it would stop the next pandemic ‘at source’.

“With our idea to generate farmed animals that cannot be infected by influenza viruses we aim to bring global health security by stopping influenza pandemics from emerging,” she said.

According to Reuters, the first DNA-edited chicks will be hatched at the Roslin Institute later this year. In these chicks, the scientists have removed parts of a protein in the DNA on which the influenza virus is dependent on.

The scientists overall aim is to generate poultry that cannot get influenza and develop a “buffer between wild birds and humans”.