Concern over ‘US-style’ farming in the UK 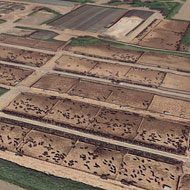 Drone footage released by the Bureau of Investigative Journalism.

New research suggests the UK is now home to nearly a dozen industrial-scale beef facilities, the largest of which fatten up to 6,000 cattle a year.

Drone footage and satellite images released by the Guardian and the Bureau of Investigative Journalism show thousands of cattle kept in outdoor pens, known as corrals, which are sometimes surround by walls, fences or straw bales.

On many of these US-style ‘feedlots’, livestock have significantly reduced or no access to pasture, the bureau said. Such farms are operating across England, in Kent, Northamptonshire, Suffolk, Norfolk, Lincolnshire, Nottinghamshire and Derbyshire.

Intensive beef farms are common in the US, where fattening is done in vast outdoor pens that house up to 85,000 livestock on the largest units. These farms have proved controversial in the past, partly due to their size, but also because of the use of hormones and antibiotics to promote growth – practices which are prohibited in the UK.

The presence of industrial-scale units in the UK has not been widely acknowledged before. The bureau’s findings have fuelled fears that the country could be heading towards US-style intensive farming after Brexit, despite previous assurances from the government that this will not happen.

Currently, there is no database of intensive beef farms in the UK, as they do not require a permit from the Environment Agency to operate – unlike intensive poultry and pig farms.

The trend for these intensive units is thought to be driven by supermarket demand. Chris Mallon, of the National Beef Association, said they had come about purely due to “efficiency”, while livestock expert Dr Jude Capper commented: “It’s almost inevitable that a larger farm can produce a greater quantity of a more affordable product”.

However, Richard Young, policy director at the Sustainable Food Trust, raised concerns that smaller scale beef farmers could be affected, as the larger farms are likely to be more efficient economically. It could also allow supermarkets to drive down the retail price of beef, meaning smaller-scale farmers cannot compete and are driven out of business.

Despite these concerns, experts reportedly reject the idea that the British beef sector will shift towards US styles of farming, owing to a lack of land, public demand, market and infrastructure.

The bureau also noted that evidence suggests most of the beef lots appear to operate to high welfare standards.

A spokesperson for the British Retail Consortium, which represents supermarkets, commented: “Our members take their responsibilities to animal welfare very seriously and work closely with trusted suppliers so that high welfare standards are upheld.

“They have strict processes in place and will thoroughly investigate any evidence of non-conformity to ensure that any problems are immediately addressed.”